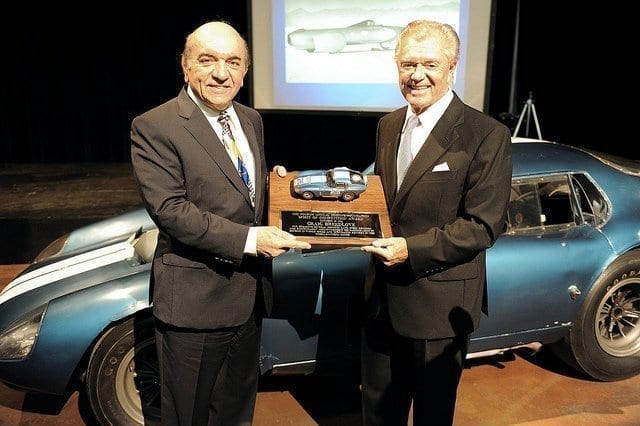 Craig Breedlove – the first person to exceed 400, 500, and 600 miles per hour on land – was the recipient of the fourth annual Simeone Foundation Automotive Museum “Spirit of Competition” Award at a dinner at the Museum on Wednesday, October 19th, 2011. Breedlove joins drivers Mario Andretti, Janet Guthrie, and John Fitch as an Award recipient.

“Craig Breedlove represents what you can achieve if you have a clear vision and determination,” commented Fred Simeone, executive director of the Simeone Foundation Automotive Museum. “With only a handful of volunteers and a shoestring budget, he was able to accomplish what many others could not. His achievements captured the country’s imagination and made him a household name.”

The Spirit of Competition Award that Dr. Simeone presented to Breedlove featured a model of the Museum’s Cobra Daytona Coupe, the car Breedlove co-drove to 23 international records in 1965, shortly before breaking the 600 MPH barrier in his Sonic I jet-powered car . The award dinner was sponsored by Wilkie Lexus, Haverford, Pa.

Breedlove used the occasion of receiving the Spirit of Competition Award to announce his intention to return to the Bonneville Salt Flats in 2013 – the 50th anniversary of his first record – to attempt to break the 800 mile-per-hour barrier. He said preliminary engineering studies have been done for the new car and two surplus GE jet engines have been located.

“This time, however, I will let someone else do the driving,” commented Breedlove.

Fifty years ago, as John Glenn and the other Mercury astronauts embarked on a billion-dollar program to rocket through the Earth’s atmosphere and reach the Moon, Breedlove and a small group of dedicated supporters were building a car in his father’s garage with an equally ambitious – and dangerous – mission: to travel to the Bonneville Salt Flats and break the world land speed record of 400 miles per hour. Determined to reach speeds never before achieved, Breedlove bolted a surplus U.S. Air Force jet engine on the back of his homemade car, the “Spirit of America,” and built what was essentially a fighter aircraft without wings. Despite operating on a limited budget, Breedlove succeeded in becoming the first person to exceed 400 miles an hour on land and went on to become the first person to break the 500 and 600 mph barriers as well.

His quest for a speed record captured the imagination of the nation and his technological feat became a symbol of national pride during the Cold War. His achievements made him a household name in the 1960s, and the Beach Boys even wrote a song about him. Shortly before exceeding 600 mph in November, 1965, Breedlove set 23 international speed records – including averaging 150 mph for 12 hours – co-driving the Shelby Cobra Daytona Coupe (CSX2287) that is on display at the Simeone Museum.