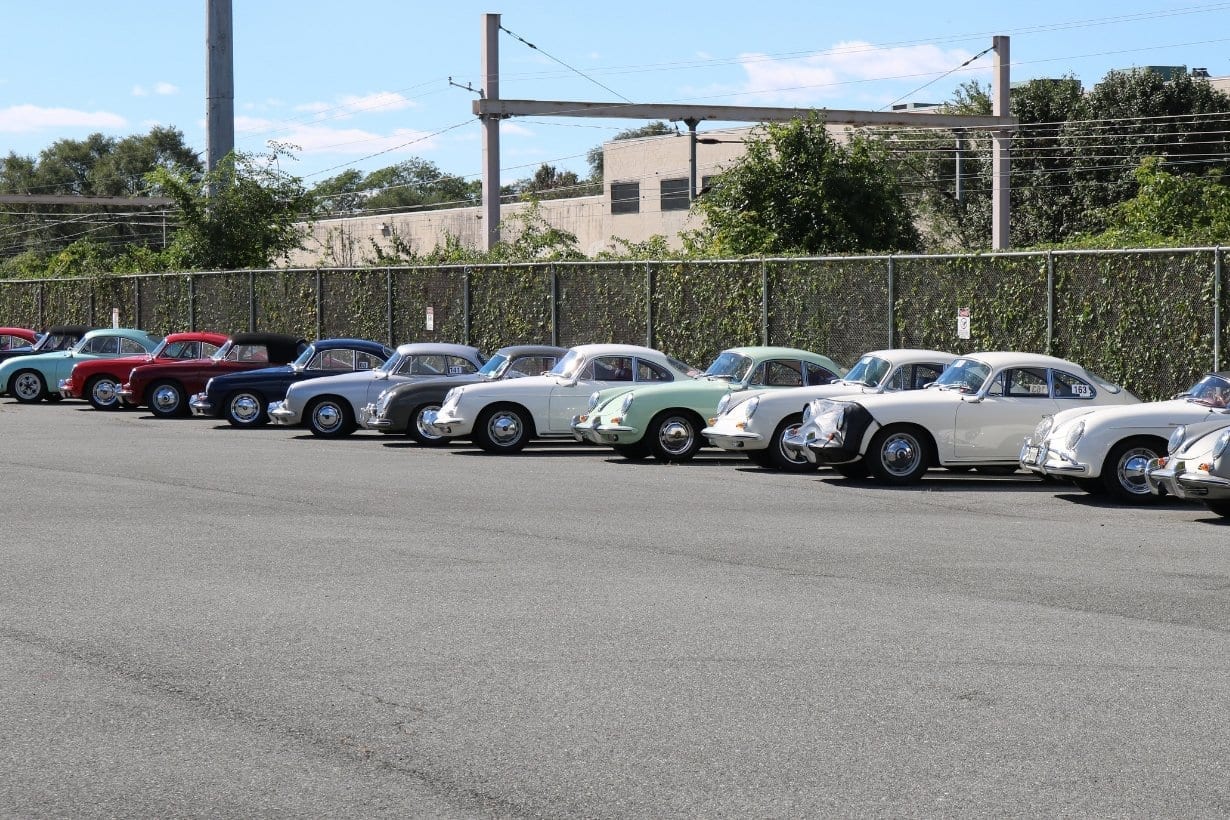 The Porsche 356 Registry visited the Simeone Museum this October with about fifty 356s parking in our back lot. They toured the museum and we all went out back for a demo of the 917 Hippy car. Fortunately, we got some lively laps in before the car sputtered and was parked. The club members didn’t suspect anything was amiss- but it felt like fuel starvation had put a sudden though timely finish to our demo.

When we got a little shop time to investigate, we checked the three fuel pumps and the ignition- all good. Then we found the culprit, a failed drive belt at the fuel injection metering unit. A phone call by the Doc and a new belt was on its way. It’s good to have car buddies, yes? So thank you to our friends at the REVS I and the Collier Museum in Naples Florida who were keeping that spare belt on the parts shelf for their beautiful Martini marked 917!

The injection metering unit is high on the forward left side of the engine with the belt out front, nestled near the firewall. A little tight but with the removal of a small cover around the near inlet throttles and enough light we could see some marks that we would need to get fuel timing correct. That’s the crucial part as the system had rotated after the belt failed. The fuel injection is all mechanical so no computers or electronics involved, just good ’ cogs and belts. One on the fuel unit and a lower one, camshaft-driven, on the engine. The upper one with a belt retaining plate held by four 10mm bolts which upon removal, permits the belt to slide forward. The belt came off with some difficulty and we were impressed by the ruggedness of the very tough material of which it is made. Clean up of the drive gears and a mirror to show us timing marks on the cam gear and its housing and another pair of marks on the fuel unit and its gear and we were ready to reassemble. The four bolt holes in the upper gear are elongated to allow fine timing adjustment. The belt was a very tight fit over the gears, so we lubed it with soap and were then able to coax it home, put the retaining plate back in place with its bolts, line up the marks and tighten all.

We put a small battery in the car where it lives behind the passenger seat and plugged a big battery into the connector jack at the rear. A fire extinguisher handy and we are ready to test start. A battery isolation switch is rotated, key on and three fuel pumps whirr, pull a line attached to the fuel enrichment lever on the metering unit… cross fingers? No, we don’t believe in Murphy’s Law, just twist the key and she fires up instantly.