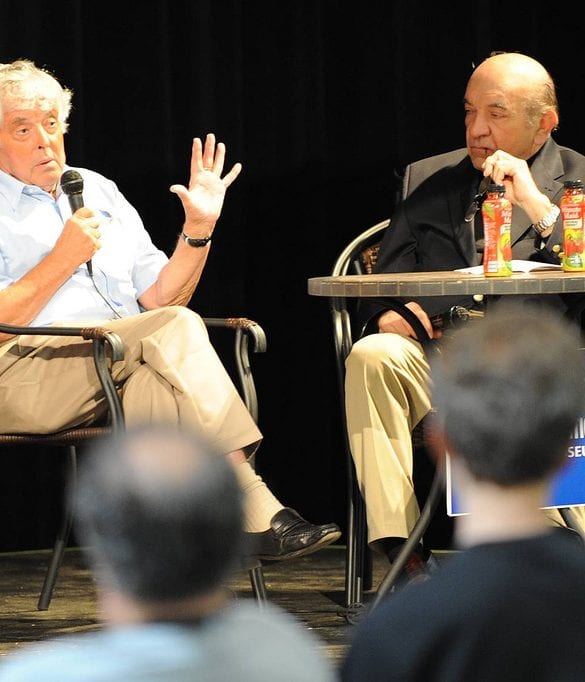 Racing legend Brian Redman enthralled the crowds who turned out for the Jaguar tribute weekend celebrating the 50th anniversary of the XK-E at the Simeone Foundation Automotive Museum, located here, on May 6th and 7th. Friday night he mesmerized the dinner guests with his stories of racing in the 1960s, 70s and 80s. Joining Redman on the stage was the spectacular red 1963 Series 1 Jaguar XK-E owned by Atlantan Richard Maury. Redman continued the next day at the Jaguar Racing Legends with an entertaining Q amp A session with Dr. Simeone. The Saturday event was capped with an outside demonstration of the Museum’s C-Type and D-Type Jaguars. Redman drove a Jaguar for the Group 44 team in the 1980s, and one of the SCCA championship-winning Group 44 XK-Es from the 1970s was on prominent display. The Jaguar Racing Legends event was sponsored by Jaguar Cars, and their local dealers: Jaguar Main Line, Wayne, Pa., and The Great Britains, Willow Grove, Pa. The Legends weekend begins with an “Evening with Brian Redman” dinner on Friday, May 6th beginning with cocktails at 5:30 p.m. Dinner is followed by remarks from Redman about his distinguished career driving for numerous teams in endurance racing and Formula One. He won the Sebring 12-Hour race twice and the Formula 5000 championship three times. The Jaguar Racing Legends Demonstration Day on May 7th began at Noon with an interview of Brian Redman in the main museum area by Dr. Simeone. The Museum’s 1953 C-Type Jaguar was discussed followed by the 1956 D-type Jaguar – the racer that formed the basis for the production XK-E. Jaguar Cars brought a Series III V-12 E-Type that the Group 44 team campaigned in the B Production class of the Sports Car Club of America (SCCA) National events. A Divisional champion in 1974, it went on to capture the SCCA’s BP National Championship in 1975. A part of the permanent collection of the Jaguar Heritage Museum, the V-12 E-Type will return after its brief stay in the U.S. to the UK to participate in this year’s Goodwood Festival of Speed. The final portion of the event was the Demonstration run. The cars moved onto the 3-acre parking lot in back of the Museum where each, in turn, was fired up and driven.