In the decade after WWII, sports car road racing resumed under the aegis of the SCCA, but it was purely an amateur sport – no prize money or sponsorship was allowed. As a result, Sebring was the only place in the US where you could see the great cars and drivers from Europe. It was a 12-hour endurance race and, along with the Le Mans 24 Hours, was one of five international races for the Maunfacturers’ Championship. Well into the 1970s, Sebring was the premier road race in this country and even today draws well over 100,000 spectators. We honored this great event on Saturday, March 24th, 2012, with cars that played a part in its history: the 1953 Cunningham C4R, a Jaguar C-Type (3rd place in 1953), and the Corvette Grand Sport, the sister car to the Sunoco Penske GS that ran in 1966. Also on display were the 1958 Ferrari TR250 Testa Rossa Ferrari driven by Ritchie Ginther and John Von Neumann that year at Sebring, The 1964 Cobra Daytona Coupe that won the GT class at Sebring in 1964, and a 1956 D-Type Jaguar that finished 3rd. The event began with a lecture by Dr. Simeone on the history of the Sebring event and the individual cars. Then, the C- and D-Type Jaguars were taken out on to the damp 3-acre back lot to be run. 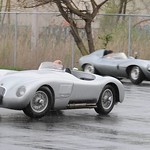