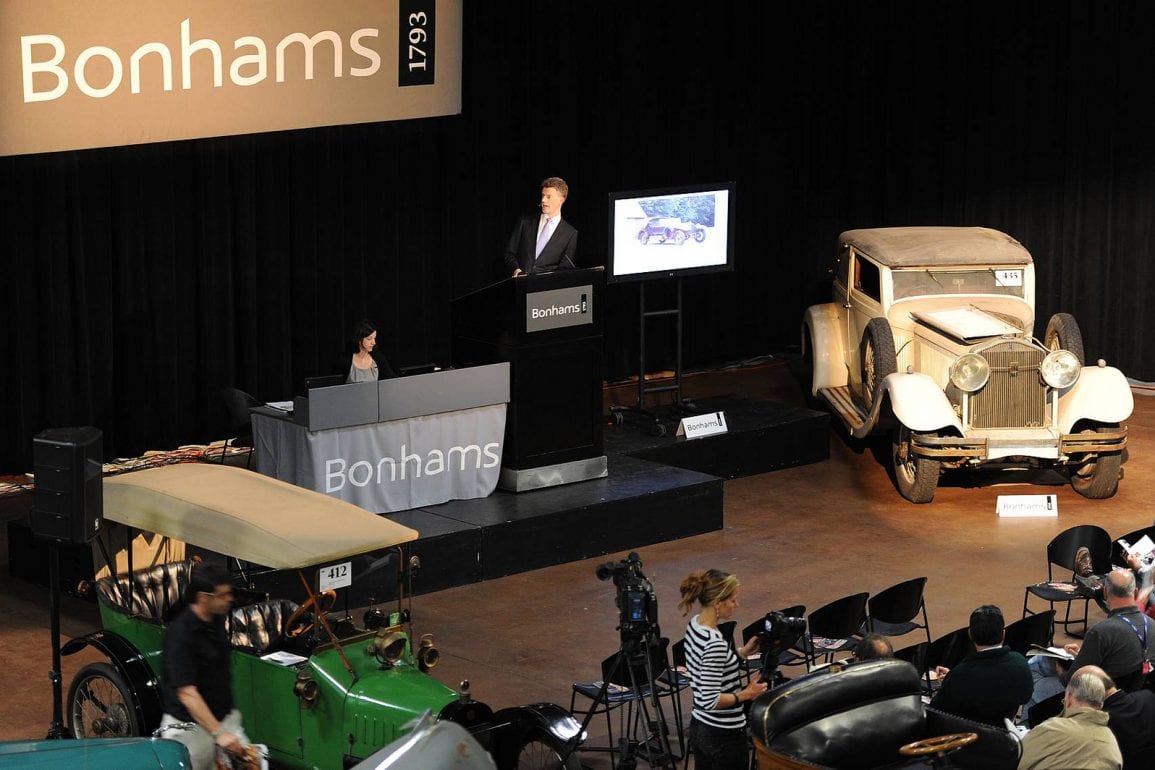 On October 8th, 2012 Bonhams conducted Preserving the Automobile: A Sale at the Simeone Foundation the first-ever auction to promote the concept of preservation of collector cars. The sale, which took place on site and in collaboration with The Simeone Automotive Museum, a vintage car museum in Philadelphia, PA, was a resounding success, totaling just under $3.0 million. Highlights of the sale included;• The 26,500 mile, 1972 Ferrari 365 GTB/4 Daytona Coupe, a totally original low mileage car, was the top lot of the sale selling for $357,000.;• Property from a Pennsylvania Collection including 26 Cars realized $700,000. The top lot of this group was the 1915 Packard Model 3-38 Gentleman’s Roadster, which realized $219,500.;• The Nathan Clark Collection realized $426,000 and was 100% sold, the top lot was the 1932 Aston Martin 1.5 Liter Le Mans Four Seater at $208,500.;• The Shaffner Collection of Rolls-Royce spares and other automobiles realized $264,000 and was 100% sold.;• The du Pont Collection of automobiles spares and accessories was a third 100% sold collection and realized over $225,000 – twice its pre-sale high estimate. This collection included a World Record Price for a 1965 Citroen Sahara at $142,500. The auction brought together local as well as international collectors and car enthusiasts with bidders participating from 20 countries on five continents.

“We were honored to be Bonhams’ choice for the locale for the first-ever auction of preservation automobiles,” said Dr. Fred Simeone, executive director of the Simeone Automotive Museum. “Promoting the conservation of historically significant automobiles is a mission of the museum and this auction brought attention to this important endeavor.”

goal of this auction was to draw attention to the concept of preserving automobiles as a growing aspect of collecting cars and also to build awareness for the spectacular collection of sports racing cars at The Simeone Automotive Museum. In both respects, with interest shown in terms of strong bidding for preserved cars, a very busy saleroom, and an active pre-sale viewing period, the sale event was a success.We are delighted with the response to this auction, the first of its kind in the world devoted to predominantly ‘preserved’ collector cars. We will be back next year and encourage owners of similar cars to begin their discussions with the Bonhams worldwide team now,” said Rupert Banner and Evan Ide of Bonhams New York who conceived and organized the sale together with Dr. Frederick Simeone, executive director of The Simeone Foundation Automotive Museum.