The Simeone Foundation Automotive Museum is now open. Click here to for information related to our opening.
Photos

Our fourth annual Classic Motorcycles at the Simeone opened on Saturday, August 11th with a Kick-start Launch Party. Over 150 guests were given an up close look at the 40+ bikes in the show and talked with the owners of these classic machines. The highlight of the evening was listening to Cycle World’s Kevin Cameron talk about the history of motorcycle technical development. Following his remerks, Nobby Clark was given a Lifetime Achievement Award. The Classic Motorcycle Show runs until Thursday, September 6th. We’re celebrating Henderson motorcycles (100 years old this year), vintage motor scooters and two-stroke racing machines.The bikes then go to Radnor for the Radnor Hunt Concours d’Elegance on Sunday, September 9th. One of the most interesting bikes we have on display is the 1923 Ace XP3 that set world speed records – on Roosevelt Blvd.! The Boyertown Museum has been kind enough to lend us this XP3 replica built by the late Dr. John Patt using the original engine and a modified frame. The bike set a world record in 1923 on the Roosevelt Blvd at 129.6 mph with rider ‘Red’ Wolverton. Records were set both as a solo (the XP4) and the sidecar (XP3) on that day. William Henderson founded the Ace Motor Corp in 1919 and acted as chief designer. The company was located in the Northeast, at Sepviva St. and Caster Ave. Earlier, Henderson founded the Henderson Motorcycle Co. The Ace later was the basis for the legendary Indian 4-cylinder motorcycle. Also on display are two of Bill Eggers’ beautiful historical reproductions of the earliest motorcycles: a 1867 Roper Steam Cycle and 1885 Daimler. Eggers motorcycles are on display at the Barber Museum in Alabama and has been shown at the Greenwich Concours. We’ll also be showing a 1962 Cotton Telstar 250cc production racer, the earliest one known to exist, and perhaps the best example in existence. 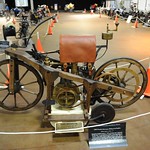 Reopening Information
Please review our new opening policies if you are going to be visiting the Simeone Museum
This website stores data such as cookies to enable important site functionality including analytics, targeting, and personalization.AcceptPrivacy Policy