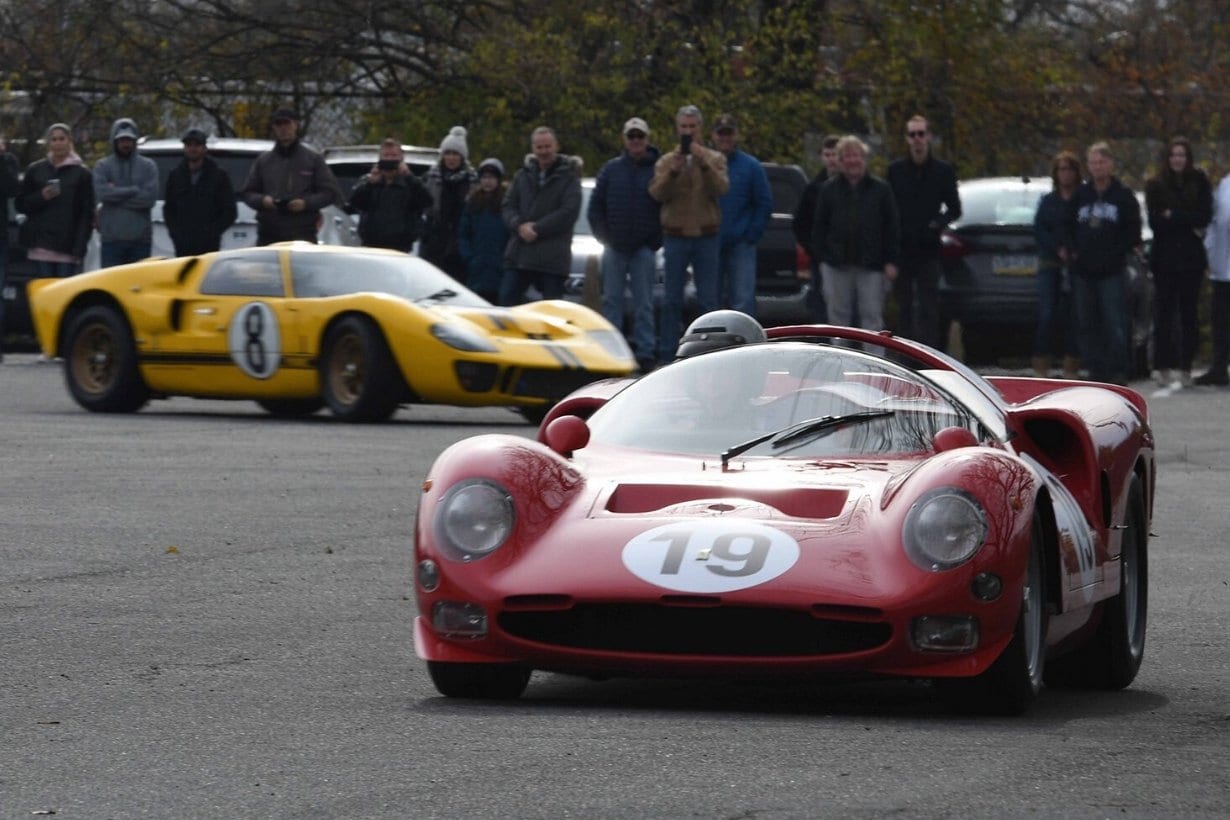 The Simeone Foundation Automotive Museum is proud to announce a new Demo Day attendance record. Ford v Ferrari – The Demo Day has become our most successful Demo Day ever! Over 700 visitors stopped by on Saturday, October 23rd to learn more about the legendary rivalry between Ford and Ferrari and the passions of Ken Miles and Carroll Shelby, set against the scene that was the 1966 24 Hours of Le Mans. Based from the blockbuster movie, our Demo Day featured a technical explanation, historic recounting, driving demonstration, and question and answer session.

The event started with Rick Adams, Director of Education for the museum, explaining the science behind each marque’s signature automobile. His presentation included technical schematics and designs specific to each auto and discussed how scientific theory impacted their evolution in design.

Afterward, Dr. Simeone took a different approach with the subject his talk, focusing on the men behind the race. Carroll Shelby, Ken Miles, Enzo Ferrari, and Lorenzo Bandini all had their own motivations and he explored each in depth. Dr. Simeone would continue by explaining how the featured cars fit into the story. He took the crowd back and forth through time with historic photos showcasing each car and its place in history.

The cumulation of the days events came with a driving demonstration of the featured cars. Our collection’s 1958 Aston Martin DBR1 began the day followed closely behind by a 1965 Shelby Cobra 289, on loan as part of Ford v Ferrari – The Museum Exhibit. Next, our famous prototype 1964 Shelby Cobra Daytona Coupe took the road, demonstrating Shelby’s first effort in the historic battle to dominate Ferrari. Finally, after much fanfare, our 1966 Ford GT40 MK II hit pavement, followed closely by its historic nemesis, the 1966 Ferrari 365 P2/3. This would not be their first encounter as each car faced off against one another in that historic race. That raced ended with a DFN. How would it end today?

Ford v Ferrari – The Demo Day concluded with a Question and Answer session. Our staff opened the gates and invited everyone to take a closer look at the participating motors cars. Dr. Simeone and museum curator Kevin Kelly fielded questions from the crowd about each car and their technical details. We opened the hoods, cameras came out, and the assembled crowds took photos of their favorite cars from the day.

We ended the day with a surprise as some of our guests brought out various Shelby cars, Ferraris, and GTs from the past and present. Our entire team want to thank everyone that brought a car out. You can check out photos and video below.